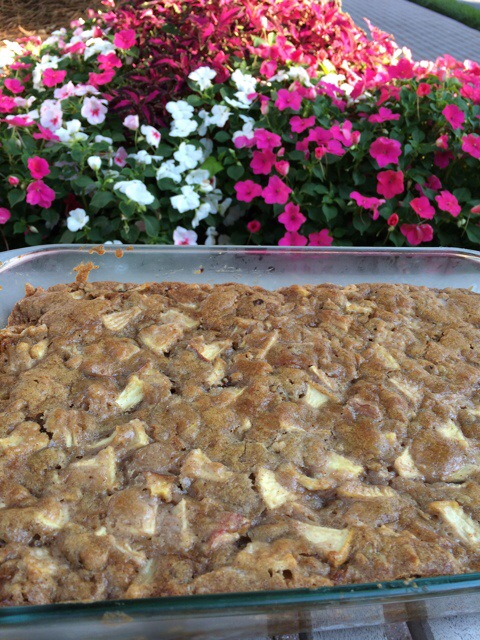 This is definitely the prettiest picture that a creation of mine has ever gotten, but for good reason! This cake is special.

Aunt Irma was my dad’s aunt, and this is her recipe. I don’t remember Aunt Irma herself ever making it, but my mom made it many times when I was a kid. She hasn’t made it in ages, and I had never made it. I believe it was my sister who randomly brought up this cake and asked me to make it. So I took the recipe from my mom, and I decided to do it.

What? Really? Yup, really. And then you mix everything together, add the apples, and mix it all together again. It fit into my stand mixer bowl with just enough room for me to stir. Although I ended up finishing the mixing when I poured it out of the bowl and into the baking dish. Mixing that much into one cohesive blob requires some muscle!

As you can see, the cake is beautiful. It looks a bit like a crisp, with apples studding the top. However, it is most definitely cake. It’s thick, moist, cinnamon-y and, well, pretty much perfect. And it’s not just for dessert! The morning after, I had a piece for breakfast and it was perfect.

I brought it both to my office and Keith brought it to his, and multiple people said it was the best thing I’ve ever made. I’ve officially added it to my menu, which you can check out here! Let me know if you want to try it too 🙂